Farewell to a unique personality

The Tanzanian pastor and HIV activist Melania Mrema Kyando has died at the age of 59 after a long illness. She motivated thousands of women in her country to find and use their own strengths.

Melania Mrema was one of the outstanding personalities of the Moravian Church in Tanzania. As a long-time secretary of the women's department, she motivated and empowered thousands of women to discover and their own strengths and to become active for a more just society.

After the death of her husband, she learned of his HIV infection. Later she realised that she was also infected. Stigma was still high in the church at that time, and so she endured the disease in secret. Only after she met a woman who was equally affected, but who spoke openly about her HIV infection, that Melania changed her mind. In a church service in 2007, she made her status public and since then she has hardly missed an opportunity to talk about HIV and AIDS.

In this way, the pastor became an important educator who contributed significantly to taking the stigma off those with the disease in secret. With a lot of charisma but also unsparing openness and humour, she encouraged people to get tested and take medication. In the past years, numerous self-help groups were founded under her leadership, including a large group with children infected with HIV.

Melania Mrema worked a lot and without regard for her own health. A few years ago she wrote:

"I myself still take every opportunity to educate about HIV/AIDS and talk about what it means to live with this virus. I call others to stand up against stigma and help them interact in a loving, Christian way. It's hard work, but God has given me the strength not only to take care of myself, but also to help others."

Melania's death leaves an unimaginable void. The Moravian Church in Tanzania loses an important voice for vulnerable people and also for the church itself. Mission 21 loses an extremely impressive, committed and reliable partner and close friend. We are grateful for her work and numerous encounters with her in Tanzania, Germany and Switzerland.

Melania Mrema Kyando's work has been documented in books and films in recent years. The film "Like You and Me" by Nicholas Calvin Mwakatobe is particularly impressive. This documentary was shown in Basel on World Aids Day 2015 in the presence of Melania. In this production, not only Melania has her say, but also many people from self-help groups with whom she has worked. It becomes impressively tangible how important her work was. Together with the Moravian Church in Tanzania, Mission 21 mourns the loss of a unique personality.

► Video: "Crocodile in my blood" by Nicholas Calvin Mwakatobe

► Mission 21's HIV-Work in Tanzania together with the Moravian Church 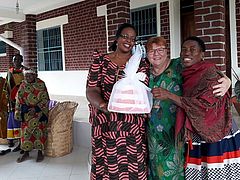