"We want to show affected women that they are not alone"

The "I walk with..." campaign entered its third round at this year's Synod Week and focuses on violence against women in Latin America. In general, the rights and empowerment of women were given high priority at the international conference of Mission 21.

Mission 21's commitment to gender justice is a fundamental component of its project work. One element that makes the joint commitment to gender justice visible is the "I walk with..." campaign: Mission 21 shows its solidarity with key individuals from partner countries, accompanies them for a year and focuses on their achievements in the struggle for gender justice. Every year "I walk with..." highlights the commitment of another woman and thus strengthens the intercontinental networking of our partners: Last year Suzan Mark from Nigeria symbolically presented the blue T-shirt to Obertina Johanis from Indonesia who this year passed it on to Ebed Grijalva Yauri from Peru. "We focus on violence against women and feminicide," said Ebed Grijalva Yauri. "With "I walk with..." we aim at sensitizing the public to this important topic and show affected women that they are not alone."

The T-shirt handover took place during the Women's pre-synod. There, the women's delegates and coordinators from Africa, Asia, Latin America, and Europe reported on the most burning issues and challenges. Burning issues were defined as feminicide, gender-based discrimination and violence, trafficking in women and human beings, and religious fundamentalism. The delegates then drew up a joint official message to the Synod which contained the main concerns of all four continents and concrete proposals for the fight against persistent inequality. 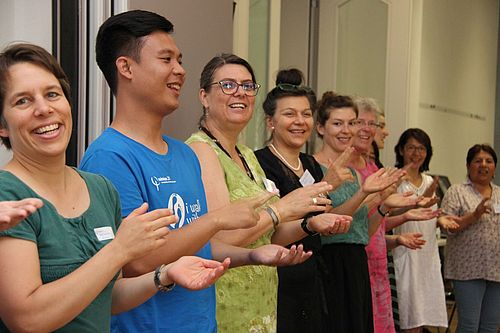 Let the body speak
Wednesday afternoon of the synod week, Liviana Bath and Jana Burger of the feminist theatre-collective Madalena Berlin held a workshop with the methods of the Theater of the Oppressed. The guests and delegates were able to deal with the urgent challenges for women in a completely different way.

The response to the event was very positive: "This method convinced me", says Halim Pratama from Indonesia, Asia Youth Coordinator of Mission 21. "We worked more with the body than with the head which allowed us to deal with topics in a new way".  Ebed Grijalva Yauri from Peru is also enthusiastic: "I think the Theatre of the Oppressed has great potential in working with indigenous women's communities. Because of their lower level of education, these women often don't have the vocabulary to express experiences of violence and injustice. That is why the physical approach is important".

The event was also accompanied by experts, including reverend Elaine Neuenfeldt, Programme Manager for Gender Justice at ACT Alliance, who ended the day together with a blazing plea for "holy rage": "Rage has a bad reputation, we rarely hear of its righteousness and justice. Jesus was also angry when he drove the merchants out of the temple in Jerusalem. And if Jesus can be angry, then so can we! Let us cultivate this holy rage and use it to transform our society." 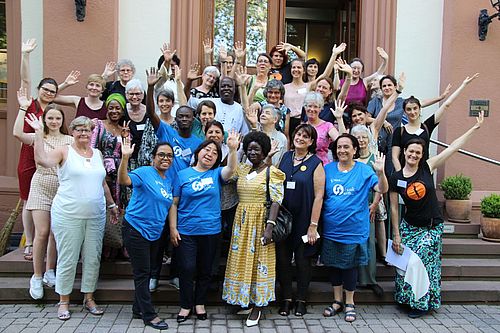