Inspirations at the International Youth Summit

18 young adults from Africa, Asia, Europe and Latin America were together in Switzerland: the youth ambassadors in the Mission 21 network spent two inspiring and horizon-expanding weeks. At the concluding "International Youth Summit", they developed concrete plans that they will implement after returning to their countries.

"I want to create an "open space", a space where people can meet each other, exchange ideas and become active," says Januar Kristianto. The 28-year-old is a pastor in a congregation in West Java, Indonesia. Sitting next to him is Abiud Dikasa from the DR Congo. He leads the youth work of his church CEK in Kwango province. "I never wanted to be a teacher - but when I return I will start teaching English," he says. "Knowing the language is just enormously important for the young generation." Minha Lee from Korea makes an important resolution: "I want to organise workshops on gender justice in my church and in other churches."

January, Abiud and Minha are three of 18 international youth ambassadors who spent more than two weeks together in Switzerland and exchanged ideas with each other.

The Youth Ambassadors programme offers young adults from Africa, Asia, Europe and Latin America the opportunity to get to know each other, to explore pressing issues in a globalised world and to work together to find solutions.

The Youth Summit during the Mission Week in Davos was originally planned as a public event, but because of Corona it was held as a closed event exclusively within the group of Youth Ambassadors.

The focus was on reflection on what steps each individual can take to find solutions to the problems that are most important in their respective contexts.

It was clear from the discussions that the exchange in the culturally mixed group provided a lot of inspiration and plans. "It was very inspiring, I learned a lot, but I was also able to share my experience," says Januar. Soon, the young adults from Africa, Asia and Latin America will return home. In the next few months, they will receive delegations of youth ambassadors from Europe who will travel to Costa Rica, Tanzania and Indonesia. The exchange continues and the network grows. 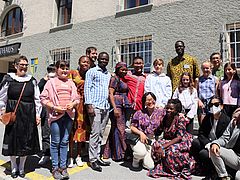 More than 500 guests enjoyed cultural and culinary delights at the end of the mission week. The Festival of Encounter on the Davos Arcade Square was… 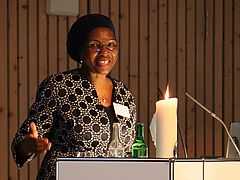 Exchange and joint work in workshops were the focus of the first day of the Mission 21 Synod. On the topic of "Vulnerability", professor of feminist…